A FB friend posted this: 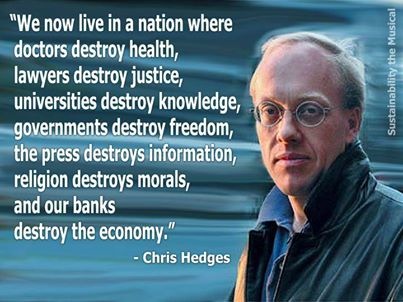 There is truth in this, but also dishonesty.  All these institutions both support and undermine the values and qualities of life which they are instituted to support and cultivate.  Repairing and redirecting existing institutions is much harder to get to grips with than overturning them.  Getting them to work like they are supposed to is a huge challenge.  They are all parts of a society in which dishonesty plays too large a part.  Getting the various parts of our culture to work as they should calls for an increase in honesty that the culture may not be prepared to acknowledge or undertake.  Posters like this one do very little to move us in the necessary direction, and might actually move us backward while claiming to move us forward, or to want to.

For example, the claim–“We now live in a nation…”–suggests that there was a former time and place in which institutions did not undermine, to greater or lesser extents, their purposes.  But if there is such a time and place in the U.S.A., or even anywhere in the world at any time in human history, I haven’t read or heard about it.

Yes, our institutions–which means the people who make them up and how they do their work–are often insipid, stupid, self-serving, blinkered and even corrupt in various ways (there’s more than one way to be corrupt).  And its hard to really look at that: disillusionment is painful.  Part of that pain comes from realizing that our original impression of how things were was itself not true.  Psychotherapy and genuine social improvement both share the need for a top-down reorganization of how life is perceived.  Because how we change who we are, and open up new possibilities of how we can be, can involve changing our perception of who we were.  The psychoanalyst Arnold Modell uses the term “retranscription” to refer to this process.

But it’s easier to feel that things were perfect and then ruined, usually by others whom we can resent.  There is a spiritual piece to this.  In spiritual traditions, the human condition is described as having “fallen from grace,” “lost contact with our origins,” etc.  And it does map onto the situation of institutions which have lost contact with their origins; so, for example, we get law instead of justice, medicine instead of health care, wild bank speculation instead of stewardship of funds underpinning the economy, etc.  Nor is my own field of psychology, which tends to produce successive fads that dominate its versions of human nature and how science and treatment should be done, instead of understanding in depth, immune from this kind of process.

In fact, many of the most effective emotion-arousing appeals in politics and religion claim that we have lost a perfect state of being which we formerly had and need to mobilize ourselves and prepare to sacrifice to regain.  Hitler, no less, was well aware of this, and used it quite deliberately.  He was able to invoke the loss of German-speaking lands in the remapping of Germany after W.W.I as a geographic example of a nation having lost its original integrity and needing to restore it by taking its destiny into its hands.  The fact that the “original” Germany he recalled was itself a relatively recent creation somehow didn’t make it into the story.

Of course, the self-promotion of the individual who highlights the deficiencies of social systems is always worth considering.  Students at Goddard College, where I later went to school, said to Stokley Charmichael, when he gave his fiery presentation against racism in America during the 1960s, “What’s in it for you?”  (If you don’t know who Stokely Charmichael was, look it up.  Though having to write this does make me feel old!)  His answer, as it was reported to me, was to the effect that this was a different kind of place than he was used to speaking at.